The aim of our research is to quantitatively describe the mechanisms of signaling and metabolic control mechanisms, which are molecular networks that regulate various biological phenomena, and to understand them as integrated “systems”. We are trying to understand cellular functions from the perspective of systems biology, using both experimental methods and computer simulations.

The essence of a signaling network is to encode information from a variety of inputs into a limited number of molecules. We are the first to discover a “temporal coding” in which the ERK pathway, AKT pathway, and insulin signaling regulate various physiological functions by encoding the input information into the temporal patterns of molecular activity. The aim of this laboratory is to clarify the mechanism of information processing in signaling networks from the viewpoint of the “temporal coding”. We use not only conventional molecular and cellular biological experiments but also various mathematical analysis methods such as simulations using differential equations, statistical models, and information theory. These methods are hypothesis-driven approaches in which hypotheses are formulated and tested based on previous knowledge. This is a common method in the life sciences so far.

In previous analyses, the results of individual studies have been integrated to form a complete picture of the system (bottom-up approach). However, it has become apparent that this approach leads to various inconsistencies. The main reasons for this are the lack of comprehensiveness and multi-level hierarchy of the molecules measured in individual studies and the different experimental conditions. Therefore, it has become necessary to bring together technologies that comprehensively measure molecules at each layer (omics technologies), measure them under the same conditions, and integrate the data for analysis, i.e., trans-omics (top-down approach). It is impossible to perform these measurements in a single laboratory. Therefore, we have collaborated with phosphoproteomics (collaboration with Prof. Nakayama of Kyushu Univ. and Prof. Matsumoto of Niigata Univ.) and metabolomics (collaboration with Prof. Soga of Keio Univ.) to perform trans-omic measurements of insulin action under the same conditions, and to automatically analyze the global network of metabolic regulation by phosphoproteins from the omics data without manual intervention. We have established a method to automatically reconstruct the global network of metabolic regulation by phosphoproteins from the omics data in an unbiased manner without manual intervention. Trans-omics is a data-driven approach to unbiased analysis of large-scale data by computer according to a certain algorithm. This approach has the same concept as the recently developed big data analysis. One of the characteristics of our laboratory is that we conduct collaborative research with various laboratories, as each omics analysis is not something that can be done in a single laboratory.

Since the signal transduction and metabolic control mechanisms are composed of many elements and complex interactions, it is difficult to understand them only by using bottom-up methods that relate the information on individual molecules obtained from experimental observations to biological phenomena. On the other hand, a top-down approach, which extracts information from mere input/output data and estimates a model, cannot uniquely determine the model in many cases. In the future, we will shrink the unbiased global network identified in the top-down approach, identify the network motifs, analyze them individually, to elucidate the design principle of temporal coding. One of our next challenges is to combine bottom-up and top-down approaches in this way.

By integrating the above temporal coding with trans-omics, we are now analyzing individual-level data such as disease model mice and human trans-omics data, and we are now at the stage where we can publish our research results in the near future. The time has come for systems biology to make a direct contribution to medicine and drug discovery. I am looking forward to the future progress.

Our research methods are very diverse. In addition to conventional molecular cell biology experiments, we use various mathematical analyses such as simulations using differential equations, system identification, statistical models, and information theory. In order to perform these mathematical analyses, a large amount of highly accurate measurement data is required. Therefore, we are trying to introduce robots and automatic measurement methods to minimize the variation caused by human labor, and to achieve automation and high throughput.

See also our movie of introduction of Kuroda Lab!

The various phenotypes exhibited by living systems are regulated by multilevel molecular networks of metabolites, proteins, and mRNAs. Insulin-mediated regulation of metabolism is a good example of this, and it is known that signaling systems regulate glucose metabolism through phosphorylation of metabolic enzymes and transcriptional regulation. In order to elucidate these multilevel regulatory mechanisms, conventional biology has conducted multilevel analysis of only the periphery of some molecules or comprehensive analysis of only one level. However, these conventional bottom-up approaches are biased by the subjectivity of the researcher, and it is undeniable that key pathways and molecules may be missed.

To overcome the limitations of such bottom-up approaches, we have established the method of “trans-omic analysis,” a top-down approach that comprehensively measures multiple levels and reconstructs a large-scale network spanning multiple levels (Yugi et al., Cell Rep., 2014, Kawata et al, iScience, 2018, Yugi et al., Trends Biotech., 2016). Data-driven reconstruction of the multi-level regulatory pathways of insulin metabolism from “cellular big data” such as metabolome (in collaboration with Soga Lab., Keio Univ.) and phosphoproteome (in collaboration with Nakayama Lab., Kyushu Univ.) revealed that the regulation by insulin covers a wider network than previously thought. As a result, it became clear that insulin regulation covers a wider network than previously thought. Furthermore, the reconstructed insulin metabolic regulatory network was analyzed using mathematical models and molecular biology experiments, and a novel pathway that functions only in the liver was discovered.

We applied this trans-omics analysis method to mouse liver and revealed a large-scale metabolic regulatory network in the livers of healthy mice and obese model mice during glucose administration or fasting (Kokaji et al, Sci. Signal., 2020, Egami et al, iScience, 2021). We found that metabolism in healthy mice is rapidly regulated by gene expression via the Akt pathway and metabolites themselves, while in obese mice, much of the fast metabolic control is lost and slow metabolic control by gene expression is activated in glucose and lipid metabolism.

This methodology can be applied not only to insulin but also to the reconstruction of metabolic regulatory networks through signal transduction. It can also be used to reconstruct networks not only in cells and liver, but also in other organs and at the individual level. Taking advantage of this property, we will conduct trans-omics analysis of other multilevel regulatory mechanisms, organs, and individuals in the future. 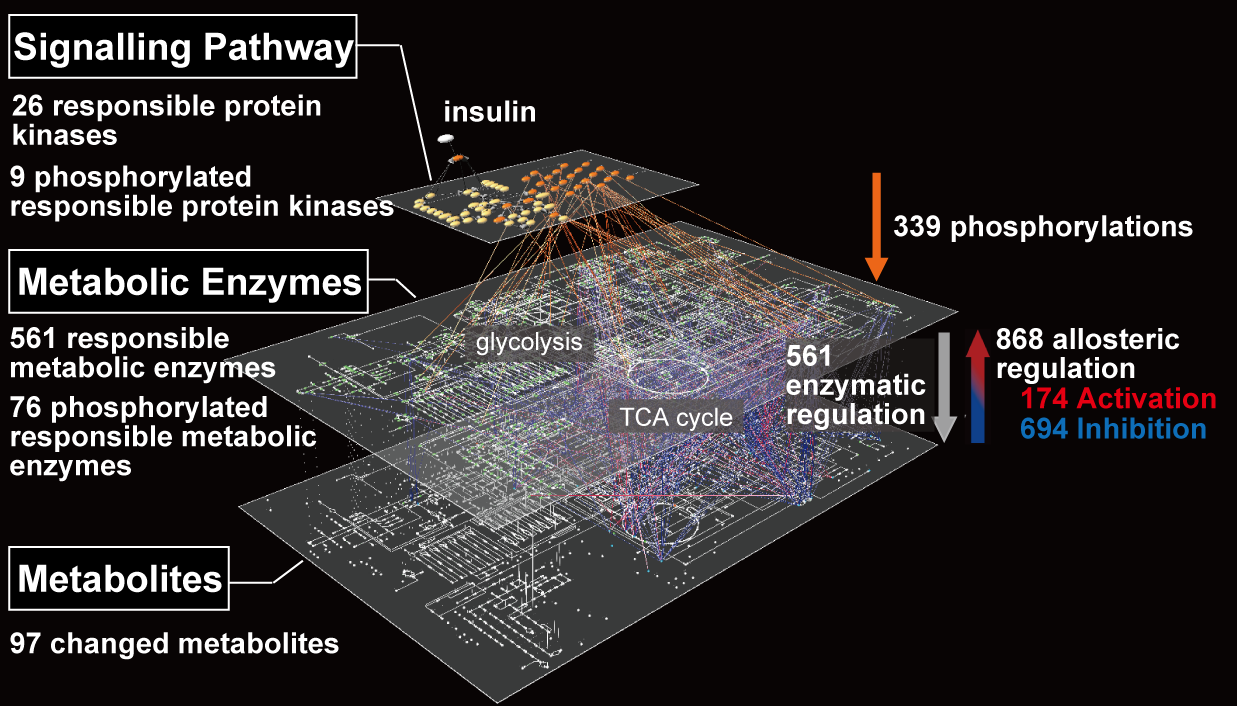 Cells adapt to their environment by regulating their responses to stimuli from the external environment, but due to the addition of noise to the signaling pathway, there is a possibility that the response cannot be accurately controlled. To evaluate how accurately a cell can respond in the presence of noise, it is necessary to perform information theoretic analysis to determine the variability of the response, and to obtain the value of mutual information using the following equation. 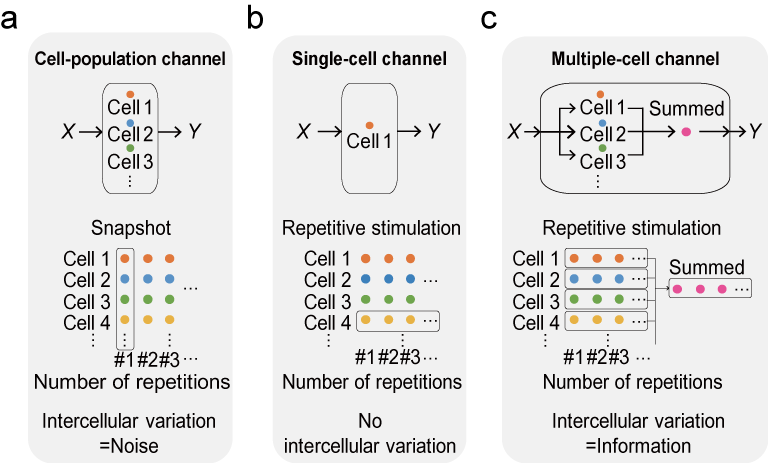 Recently, we succeeded in measuring intracellular and intercellular variability separately by applying repetitive stimuli to cultured mouse skeletal muscle cells C2C12 and isolated myofibers (Fig. 1B) (Wada et al., 2020). In addition, we investigated the tissue response, which is a more natural form of signal transduction for multicellular organisms (Fig. 1C). Interestingly, we found that the intercellular variability allowed the tissue to distinguish between more different stimulus intensities, which in contrast to previous studies in which the intercellular variability was noise (Fig. 2). We named this effect the “response diversity effect”. Furthermore, in vivo electromyographic measurements of facial muscles by electrical stimulation of the facial nerve showed that muscles in vivo responded more accurately than cells. We believe that the clarification of the precise response control mechanism due to the variability of the response of each cell will clarify the response control at the organ level, and will be useful in elucidating the mechanism of abnormal response control of organs due to diseases. 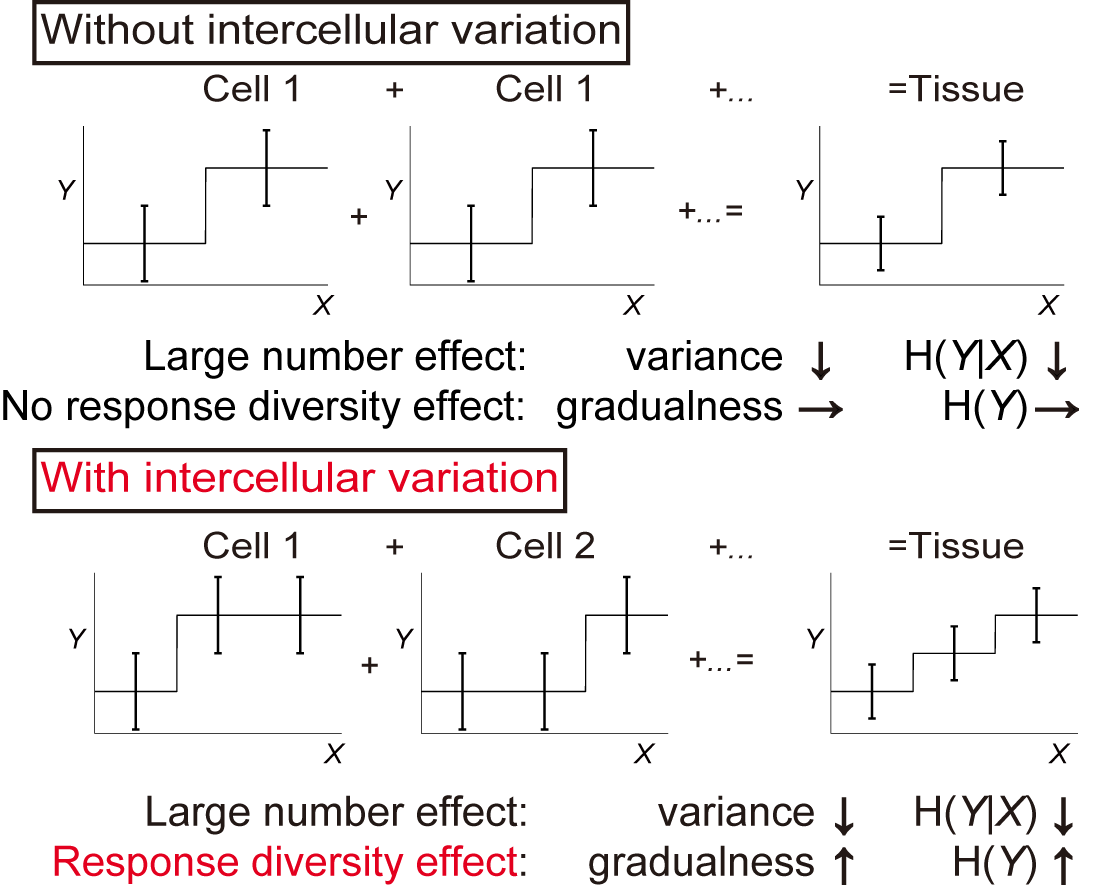 We are also conducting research focusing on the concentration of metabolites and hormones in human blood after glucose ingestion. After oral glucose or dietary ingestion, through absorption from the small intestine, blood glucose concentrations increase, and is stored and released in the liver and muscles, and these actions are promoted and inhibited by blood hormones. Insulin, the central blood glucose regulating hormone, not only inhibits the rise in blood glucose levels, is also involved in the control of many other metabolites, such as amino acids and lipids. However, the detailed temporal changes in the concentration (=temporal pattern) of comprehensive metabolites and hormones over long periods after oral glucose ingestion have yet to be examined. In healthy humans after glucose ingestion, therefore, we characterized the temporal patterns of comprehensive metabolite and hormones among individuals and among molecules by four features (Fig. 1, Fujita et al., under review, in collaboration with Soga Lab, Keio Univ.). (1) the decomposability into “amplitude” and “rate” components, (2) the similarity of temporal patterns among individuals, (3) the relation of molecules among individuals’ relation over time, and (4) the similarity of temporal patterns among molecules.

On the other hand, we have also conducted research on a narrower range of target molecules, using mathematical models to describe the dynamic relationship between molecular concentrations after glucose ingestion. For example, in the study to describe blood glucose regulation by mathematical models using time-series data of blood molecule concentrations during and following oral glucose ingestion with various doses and durations, predicted that intermittent ingestion 30 min apart was the optimal glucose ingestion patterns that minimized the peak value of blood glucose level.

In addition, a study describing the feedback regulation of blood glucose and insulin by a mathematical model using time-series data of the blood molecule concentrations from a clinical trial in 111 subjects, including healthy normoglycemic and diabetic subjects with consecutive hyperglycemic clamp and hyperinsulinemic-euglycemic clamp conditions( Ohashi et al., 2015, 2018) showed, for the first time, that blood insulin removal is involved in the progression of type 2 diabetes. Thus, by using time-series data of molecular concentrations in blood obtained from human clinical trials and describing the regulatory relationships among molecules using mathematical models, we believe that we can devise appropriate health management methods and elucidate the degree of action (intensity of action) of molecules and the mechanisms of molecular action in the human body.

Search within the site